skip to main | skip to sidebar

Once Upon an Island

It was an impulsive and fortuitous decision, clearly meant-to-be:  just a week ahead of time, I put in motion a plan to attend a workshop at the St Michael Institute of Sacred Art entitled "The Decorated Page", taught by the incomparable Harvest Crittenden, herself rather decorated as a Master Penman and Master Engrosser.  I had blocked out a week's vacation--the same week I had gone to the Spencerian Saga the last two years, but I had done a third West Coast Saga in April this year in Berkeley--and had not been able to come up with something that appealed to me to do.  Then I woke up one morning and the plan seemed to have fully formed itself in the night:  Enders Island, Mystic, Connecticut.

A few emails and phone calls were made, and before I knew it I was on a plane bound for Providence, armed with my left-handed nibs and some delicious anticipation.  Any picture I had in my mind was pale compared to the real thing:
It was sheer magic from the moment we arrived. 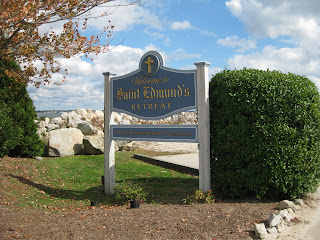 This was the view from my room, the first morning at sunrise: 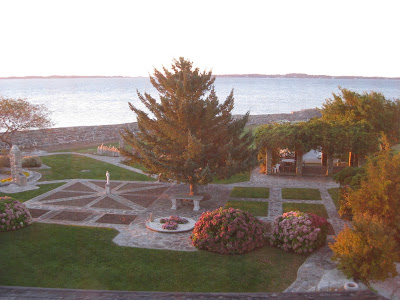 Autumn was in its full glory and I gratefully got my "fix" of fall color.  This was taken on a walk in a nearby neighborhood. 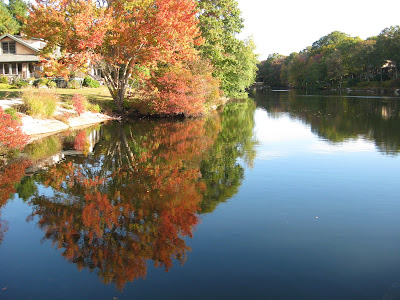 Add to this some fantastic meals and a whole island of friendly people, and the stage was set for an incomparable experience.

The first two days were spent studying the work of local hero Angelo Rassu, (a mid-20th century engrosser whose amazing collection is housed on Enders and curated by Harvest--stay tuned for her forthcoming publication on him!); practicing Engrosser's Text (new to me, not to be confused with Engrosser's Script!) with a broad nib;  laying out our text designs; and finally, putting the lettering onto the page Harvest had prepared for us with the outline of the border design. 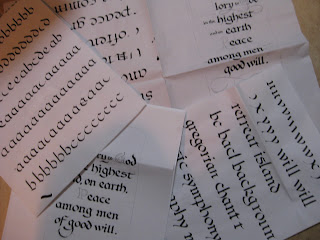 Next we learned to apply gold and palladium leaf.  This included a field trip to a nearby marsh to collect reeds to cut into tubes with which to moisten the dried Instacoll for receiving the leaf. 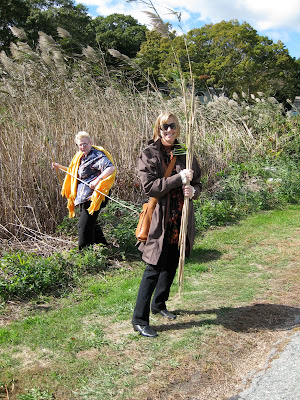 With the gilding beautifully in place, we then were extensively schooled in color theory--specifically Harvest's fabulous CMYK primary palette--and set about creating our colors, hues and shades.  I was drawn to the seasonal decorations in front of the main building (where our scriptorium was housed) which included this ornamental kale... 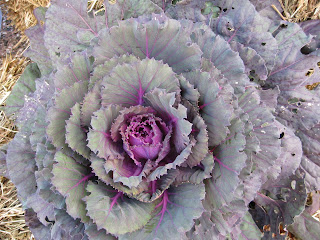 ...and became, with much tutelage from Harvest, this palette of gouache. 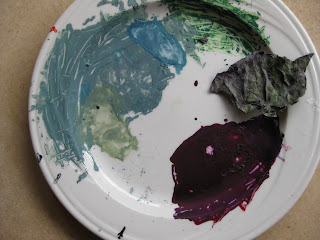 Thus began the Painting of the Acanthus Leaves, a relaxing and pleasurable activity accompanied by Gregorian chant from the workshop upstairs, and/or conversation  (oh, and some SF Giants radio baseball, too, couldn't help myself!)  among the most simpatico group of women I have had the pleasure to be in a class with. 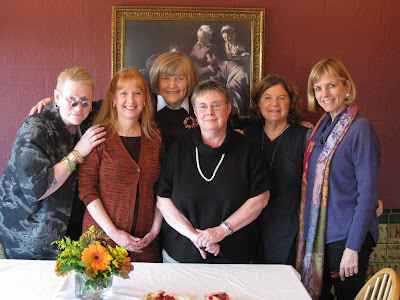 Some of us worked into the wee hours and all enjoyed every minute.  Here are some of the "raw" painted leaves: 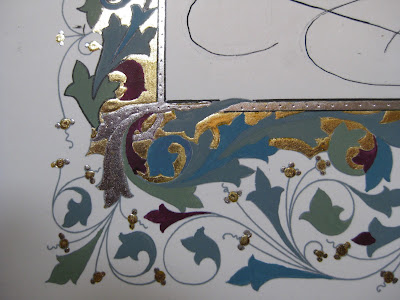 ...later shaded and outlined to make them "pop", along with some tooling on the gold.  The illuminated G includes a traditional white vine design. 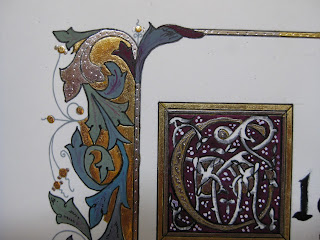 It is difficult to express how enlightening and restorative those few short days were for me. The place, the people, the art.  In some ways it felt so personal and inward that it is daunting to attempt to put it into words.  I can't say enough about Harvest's teaching: she is thorough, original, imaginative, attentive and flexible---and it goes without saying that her artistry is magnificent inspiration.
I don't know if I'll ever finish this piece, or whether it would even be possible to know when it was finished.  But maybe that's the way to keep the essence of the experience alive for myself.  It's a wonderful reminder that in this era of instant gratification and 24/7 access, one can delve deeply into something for an entire week and know that it has only just begun. 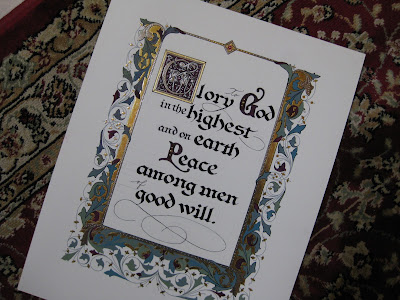 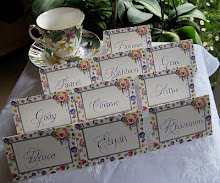 Jody Meese
SF Bay Area, California
As a professional lettering artist, I relish the variety of projects, venues, styles and media I experience every day. From commercial chalkboards, to illuminated manuscripts, to events providing onsite personalization with calligraphy and engraving, I enjoy bringing beauty to the world, one letter at a time! "Mil Plumas" is Spanish for "a thousand pens" or "a thousand quills", and is also a nod to my late grandmother who was a writer named, oddly enough, Mildred Pluma. I am a member of IAMPETH, San Francisco Friends of Calligraphy, Society for Calligraphy of Southern California and Washington Calligraphers Guild.